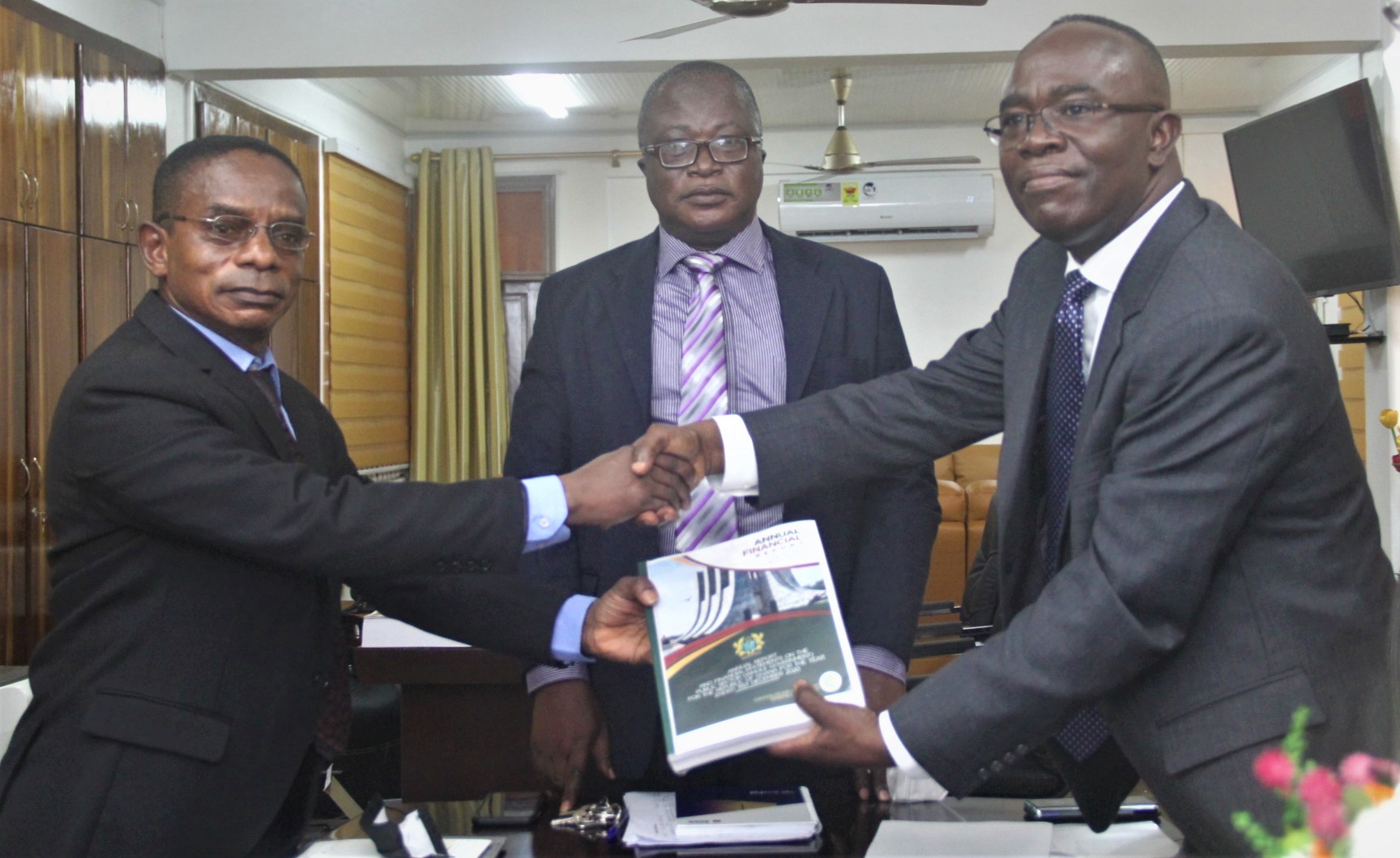 The Acting Controller and Accountant-General Mr. Kwasi Kwaning – Bosompem has delivered
on the mandate of preparation and submission of the National Accounts to the Ag. Auditor-
General of the Republic of Ghana. It is worthy to note that this is the second time in a row that
the Department has been able to prepare and submit the accounts one clear week before the
statutory deadline of 31st March.
In a short ceremony to present the annual accounts at the office of the Acting Auditor- General,
Mr. Kwaning-Bosompem, emphasized the tremendous efforts put in over the years to build on
the scope of the accounts. Till 2018, the national accounts covered only the Consolidated Fund.
The first milestone in expanding the scope of the National Accounts was achieved in 2018 when
other public funds namely IGF, Statutory funds, and Donor funds were covered in the accounts.
The second milestone was achieved in 2019 when the MMDAs were included in the accounts to
produce General Government Accounts for the first time in the history of Ghana.

The third milestone, which is the ultimate, was achieved this year when the Department
expanded the scope to include the State-Owned Enterprises (SOEs) in the 2020 national accounts
to produce Whole Government national accounts, which was submitted ahead of time. This
makes Ghana the first country in Africa and very few countries in the World to have achieved
this. The components of the accounts include consolidated Statement of Financial Position,
Statement of Financial Performance, Statement of Receipts and Payments, Cash Flow Statement,
Notes to the Accounts, and relevant Schedules as required by the PFM Act 2016 and the
Regulations, as well as the International Public Sector Accounting Standards (IPSAS).
Receiving and acknowledging the accounts, Mr. Johnson Akuamoah Asiedu, the Acting Auditor-
General recognized the hard work and efforts of the CAG in delivering his mandate and in a
timely manner. He further noted that his staff would also do all the necessary work on the
account in expressing an opinion on the true and fair view of the account as well as compliance
with the necessary standards, “as enjoined by Section 13 of the Audit Service Act 2000, Act 584,
which states that the Auditor-General is furnished with the necessary financial statements for his
scrutiny and onward transmission to Parliament and eventual gazetting.”

The PFM Act 2019 (Act 921) mandates the CAG to prepare and submit to the Auditor General and the
Minister for Finance, consolidated accounts on all public funds by the end of three months after the end
of each financial year. The CAG is also mandated to submit quarterly accounts of all public funds.
Also present at the ceremony were Mr. Ali Mohammed Zakaria (Deputy Auditor- General, F&A), Mr.
Edward Akuamoah-Boateng (Deputy Controller and Accountant-General, FMS), Mr. Mac-Effort Adadey
(Head of National Accounts), Mr. Cephas Dosoo (Head, Public Relations-CAGD), and other
representatives of the Audit Service and the CAGD.