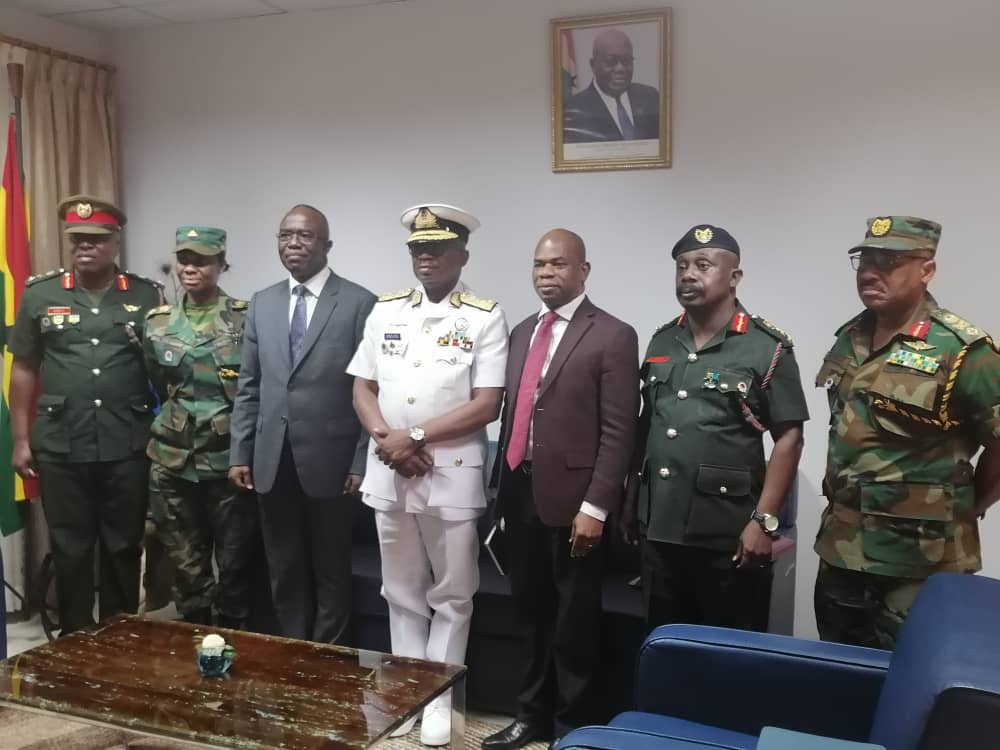 Vice Admiral Seth Amoama, the newly appointed Chief of Defence Staff (CDS) has paid a courtesy call on the Acting Controller and Accountant-General (CAG), Mr. Kwasi Kwaning-Bosompem. The meeting which took place on March 18, 2021, was to afford the CDS the opportunity to deliberate on issues that relate to the operations of CAGD and has bearing on the Ghana Armed Forces and also to further deepen the cordial relations that exist between the two Institutions.

The Ag. CAG took the opportunity to introduce the CDS and his team to the functions of the CAGD as they pertain to the six Divisions; Finance and Administration, Payroll Management, Audit and Investigations, Treasury Management, Financial Management Services and Information and Communication Technology Management. Mr. Kwaning-Bosompem also mentioned that the Department has offices in all the sixteen Regions and staff in all MDAs and MMDAs. Excerpts of the discussions were; (i) The Chief of Defence Staff commended Controller and Accountant-General for his personal intervention in the prompt processing and clearing of backlog of pensions of retired members of the Armed Forces. He however appealed to the CAG for an expedited action on the payment of pensions of the remaining personnel, especially that of the widows’ pension.

Mr. Kwaning-Bosompem assured them of his preparedness and the readiness of his staff to work assiduously to clear all backlogs. He however urged that the Armed Forces to streamline their records and ensure that the necessary documents are forwarded to the Pensions Directorate on time so they are promptly dealt with.
(ii) According to the CDS, a Pension Unit has been created by the Armed Forces to process all pensions for onward transfer to CAGD for the final processing and payment. He appealed to the CAG to consider assigning some of his staff to their Pension Unit to help fast track the processes. CAG assured the CDS that he will consider the request and get back to him.
(iii) The CDS informed the CAG of their intention to digitize their Pension processes and will require the assistance of CAG in getting the appropriate system that can easily interface with or integrate into the CAGD Pension system for seamless processing of pensions. The CDS also requested for the assistance of the CAG in improving the payroll system of the Armed Forces. Mr. Kwaning-Bosompem elaborated the state-of-the-art ICT equipment being used as well as the risk mitigation controls like a Disaster Recovery site that CAGD has deployed. He therefore requested for early collaboration to address the requests of the Chief of Defence Staff.

Finally, the CDS thanked the CAG for his warm reception and hope that such interactions will take place frequently. He was full of praise for the CAGs commitment in seeing to ensuring that issues of the Armed Forces receive prompt attention. The CDS could not hide his delight and admiration of the beautiful edifice of the CAGD. The CAG thanked the CDS for his visit and assured him of his personal commitment in ensuring that issues of the Armed Forces are dealt
with promptly.

Previous Post 2021 GoG NAT’L ACCOUNTS PRESENTED AHEAD OF TIME FOR THE THIRD SUCCESSIVE YEAR RUNNING AS MANDATED IN THE PFM ACT, 2016
Next Post CAGD sets dates for nationwide sensitization exercise on the new TPRS – Check details