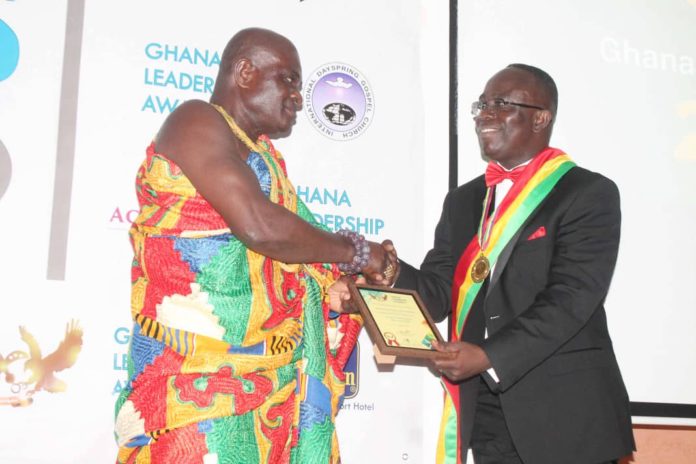 The acting Controller and Accountant General, Mr Kwasi Kwaning Bosompem, has been adjudged the Governance and Civil Leader of the Year at the 2019 Ghana Leadership Awards.

The honour, according to the organisers, was in recognition of his outstanding and exemplary leadership in public sector governance and commitment to duty.

Additionally, Mr Bosompem has been inducted into the Ghana Leadership Awards Hall of Fame, positioning him as a model worth emulating by other leaders to drive development in all aspects of governance.

It was a night of glitz and glamour as scores of distinguished personalities, who have demonstrated servant leadership in their respective positions mounted one stage to be celebrated.

The event, on the theme, “The Leadership Future of the Ghanaian and the African Youth’, seeks to celebrate and recognise most outstanding and exemplary leadership that positively impacts the development of Ghana and Africa.

Other awardees included the Auditor-General, Mr Daniel Domelevo, who was adjudged the Public Servant of the Year, as well as a former Minister of Gender, Children and Social Protection, Ms Otiko Afisa Djaba, and MP for Awutu Senya, Mr George Andah, who clinched the CEO of the Year and MP of the Year awards respectively.

Reacting to the honour done him, a visibly elated Mr Bosompem said the acknowledgment will motivate him to work harder to boost the operations of the CAGD to effectively deliver on its mandate.

“I’m humbled by this award. This gives me the motivation to do more, having in mind that whatever you do somebody somewhere is looking at you and watching your performance,” he said.

Mr Bosompem said the Department had put the necessary measures in place to improve its relations with the public as well as make its services flexible.

He encouraged all state agencies to use the Ghana Integrated Financial Management Information System (GIFMIS) to process all financial transactions to enable the platform to achieve its objective of harmonising and tracking all government expenditure.

He said it was unlawful for state agencies, including ministries, departments and agencies (MDAs), municipal and district assemblies (MMDAs), to process payments outside the GIFMIS, a practice, he said, would attract sanctions.

“We encourage every MDA and MMDA to use this platform so that we can get access to their data and work with it,” Mr Bosompem urged.