Home News 2021 GoG NAT’L ACCOUNTS PRESENTED AHEAD OF TIME FOR THE THIRD SUCCESSIVE YEAR RUNNING AS MANDATED IN THE PFM ACT, 2016 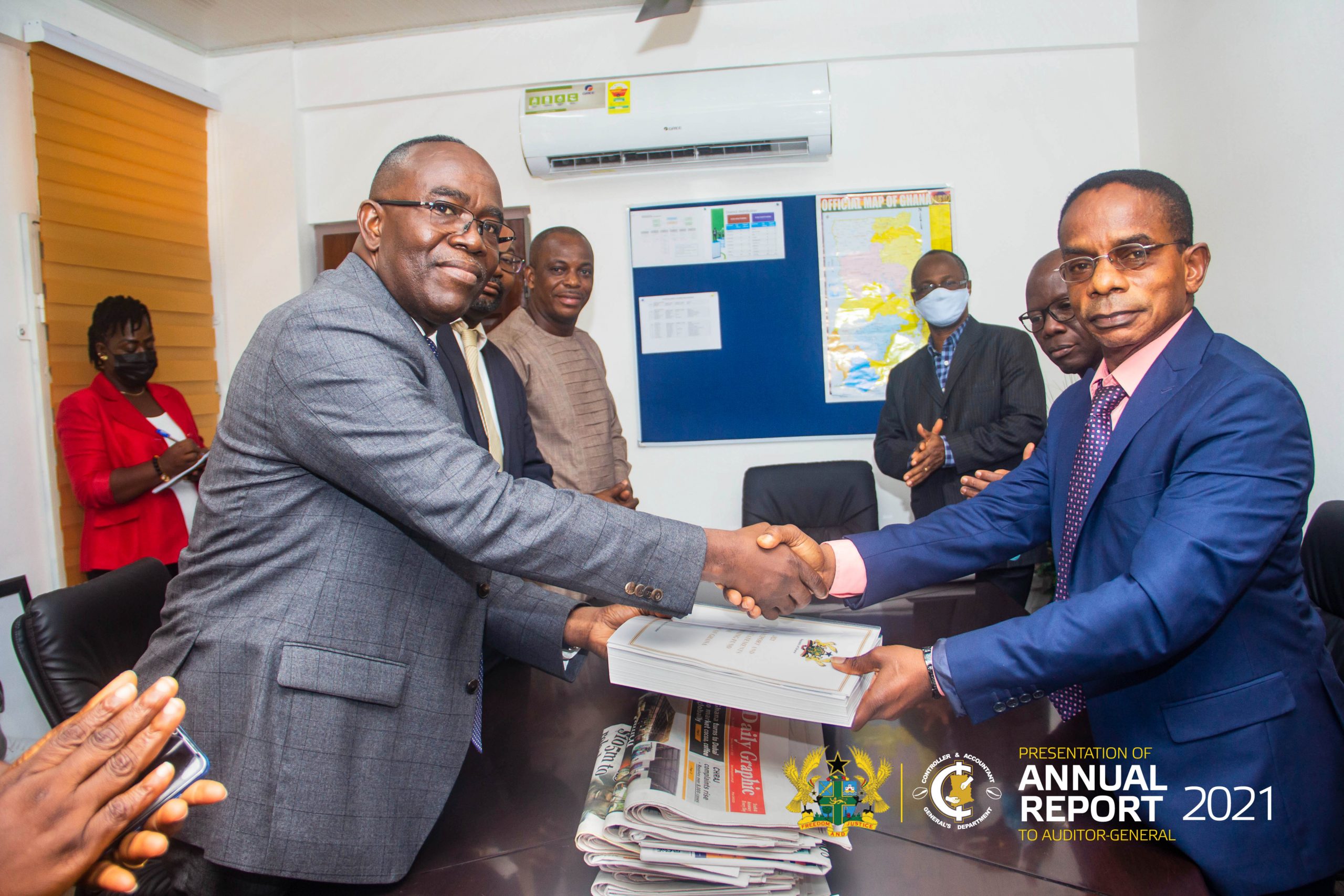 The Controller and Accountant-General, Mr. Kwasi Kwaning-Bosompem has once again delivered on the mandate of preparation and submission of the 2021 National Accounts to the Auditor General (A.G), Mr. Johnson Akuamoah Asiedu. It is worthy to note that this is the third time the Department has been able to prepare and submit the Accounts before the statutory deadline of 31st March.

Mr. Kwaning-Bosompem at a short ceremony to hand over the 2021 Accounts to the A. G, said the Department over the years has put in much effort to expand the scope of the National Accounts to cover all public funds at all covered entities as mandated by the PFM Act, 2016.He said the 2019 National Accounts covered fully Central Government (MDAs) and General Government (MMDAs). This was also expanded to achieve Whole-of-Government reporting in the 2020 Accounts which covered 19 State-Owned Enterprises (SOEs).

Mr. Kwaning-Bosompem noted that this year, 48 State-Owned Enterprises have been included in the National Accounts and about 98% about 86% of IPSAS coverage was achieved in the 2021 Accounts. He hinted that, steps are being taken to bring all Government fixed assets on the balance sheet. He said the current National Accounts preparation process has provided a learning and capacity building opportunity for Public Sector Accountants not only Ghana but also in Africa as a whole. He said very soon Ghana’s National Account will become the very envy of many countries across the continent.

The components of the accounts include Consolidated Statement of Financial Performance, Statements of Receipt and Payments, Cash flow statement, Notes to the Accounts and Relevant schedules as required by the PFM Act 2016 and the Regulations as well as the International Public Sector Accounting Standards (IPSAS).

The Auditor-General, Mr. Johnson Akuamoah Asiedu, receiving and acknowledging the accounts was full of praise for the Department in ensuring that the Accounts were prepared and submitted on time. He said this will help his outfit to also work on the accounts on time for onward submission to Parliament and gazetting as enjoined by Section 13 of the Audit Service Act 2000, Act 584.